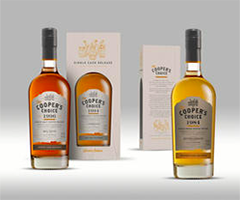 In Scotland, any whisky distilled, either malt or grain, must remain in an oak cask for a minimum of 3 years before it can legally be called “Scotch Whisky”

The making of the casks by the Cooper is an art passed on from generation to generation since the middle ages and beyond.  Who better then to choose the perfect oak cask for maturing our whiskies then the man who made the barrel?

The Coopers Choice range of single cask whiskies from Scotland’s finest distilleries is our homage to these fine craftsmen and their important role in the Scotch Whisky industry.

There are 3 types of casks commonly used in the Scotch Whisky industry; the sherry butt, which holds about 500 litres, the hogshead which holds about 250 litres, and the barrel, 195 litres.  These are mostly made of American oak which has already been used to mature Bourbon whisky.

The time Scotch Whisky spends in the cask has a profound effect as it not only allows the whisky to mellow and mature but most importantly, to take on some of the characteristics of the wood.

In recent years it has become increasingly popular to “finish” mature malts and grains by resting them for a further short period in casks which have previously held other wines.  Thus we can now have Scotch Whiskies finished in Port Pipes, various sherries, Madeira wines and even French wine casks.  With Coopers Choice we embrace the variety of flavours different casks offer to our whiskies and we are sure you will enjoy.